In 2016, Sam returned to his maternal homeland of the Philippines, making his Asian show debut headlining the first Gayborhood at Pineapple Lab in Makati, Metro Manila.

In 2017, he was awarded funding by Arts Council England and the British Council as part of their Artists’ International Development Fund for his project Making in Makati. He returned to Manila in late 2017 to work with Pineapple Lab again, and research and develop his first long-form solo show, incorporate more work on race within his work on identity, collaborate with local queer artists, and participate in Fringe Manila 2018, which takes place every February, the Philippines’ National Arts Month.

In addition to being Pineapple Lab’s first Artist-in-Residence of 2018, Sam performed the most out of any artist at FringeMNL 2018. These performances included the Fringe Manila 2018 Opening Party at Museo ng Makati, Bodabil, a show co-presented by Burlesque PH and The Hernandez Brothers at Pineapple Lab exploring the history of burlesque and vaudeville within the Philippines, and Gay Per View, a live screening event at Dulo MNL of RuPaul’s Drag Race: All Stars 3, in association with the Philippines’ only gay magazine TEAM. Sam’s performances met with critical acclaim from leading national news outlets including INQUIRER.net and ABS-CBN News, with the latter including ‘Sam Reynolds at Fringe Manila’ on their 8 Things To Do This Weekend for his final show. Sam and his workshops were also mentioned in leading national outlets such as Rappler, People Asia, adobo magazine, and Tatler Philippines.

Sam held a series of workshops he called the (T)werkshop, which culminated in a variety show showcase at Pineapple Lab’s Gayborhood as part of Fringe at Dulo. Twenty local artists took part in the workshops and made brand new short-form solo performance pieces, presenting them at the packed-out showcase to an ecstatic audience response. In his (T)werkshop, Sam created a safe, inclusive, and supportive environment and structured effective tasks and activities which encouraged his participants to challenge themselves, explore vulnerability, and create work which was personal to them. This resulted in a charged variety show that spotlighted Filipinx LGBTQIA+ artists showcasing provocative, queer, and truly avant garde work, within the social, political, and religious constructs of the Philippines. 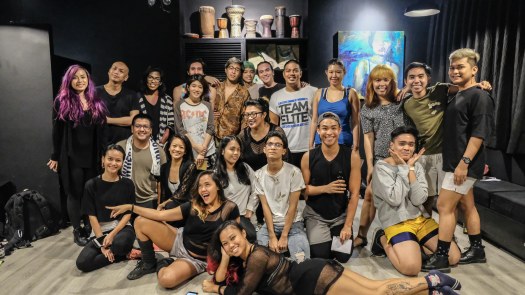 Sam is incredibly grateful to Pineapple Lab, Fringe Manila, Arts Council England, the British Council, everyone he worked with, everyone who watched and supported, and of course his (T)werkshoppers, for helping to make Making in Makati the sublime, unforgettable experience it was.

The following year, Sam brought his (T)werkshops back home to Asia as part of his art residency in Taipei through the UK-Taiwan artist exchange program Artists Home Swap, where he again worked with local queer artists. As part of the showcase, one of his Manila (T)werkshoppers, Foxxxy Gray, did a special guest performance. The following month, Sam returned to Manila and opened Pineapple Lab’s Gayborhood at Escolta Block Festival 2019, in a line-up which featured his Manila (T)werkshoppers Foxxxy Gray, Buttercock, and Lucinda Sky.